Lincoln’s birthday was last week on February 12th in 1809. He is probably most remembered for his outspoken stance on the expansion of slavery and his attempts to reunify the country throughout the Civil War. Unfortunately, he was shot only five days after the war ended by a man who was incensed after attending a speech in which Lincoln promoted voting rights for blacks. It is difficult not to wonder how our country might have progressed differently if John Wilkes Booth had been unsuccessful in his assassination plot. 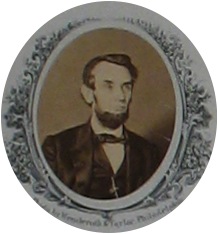 Photograph of Lincoln on the Emancipation Proclamation

As a paper conservator, I have had the great honor of working on a number of Lincoln-related materials, including personal letters, military commissions, and two printed versions of the Emancipation Proclamation. 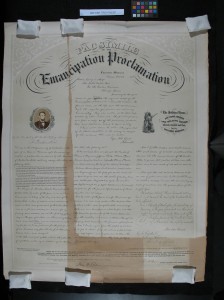 This copy of the Emancipation Proclamation was issued by the U.S Sanitary Commission on October 26, 1863 to help raise money for wounded soldiers. A note from Lincoln at the top describes his donation of the original handwritten draft of the famous document at the request of the Sanitary Commission and his desire to support the comfort and relief of the soldiers by doing so. The Sanitary Commission was a volunteer organization established to provide sanitary and medical assistance to the Union volunteer forces during the Civil War. The organization was primarily run and staffed by women, including Clara Bolton, Dorothea Dix, and Louisa May Alcott. 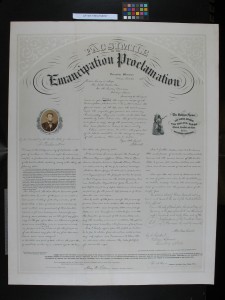 As you can see, the lithograph was severely stained (due to contact with an acidic material when rolled). Several long tears extended into the text and the edges were worn and tattered due to being crushed during storage. Conservation treatment included surface cleaning to remove dirt and other accretions from the paper. The photograph of Lincoln was temporarily removed so the print could be treated more thoroughly. After careful testing, the print was humidified and immersed in a series of water baths. This helped reduce the acidity in the paper by removing soluble acids. As a result, the associated discoloration was also removed, making the paper appear lighter. However, the dark brown stains required further treatment – exposure to controlled artificial light while immersed in alkaline water as well as local application of a dilute chemical bleaching agent. Each stain-reducing treatment was followed with a water bath to rinse out products that could potentially harm the paper. The lithograph was then backed with a double layer of Japanese mulberry paper using wheat starch paste. These materials are strong, chemically stable, and easily reversible –  requirements for any material used in a conservation treatment. The photograph of Lincoln was readhered to the front of the lithograph using wheat starch paste and the Emancipation Proclamation was returned to the client in a much-improved state.

Here are two links related to the Emancipation Proclamation which I hope you will also find interesting:

The US Sanitary Commission’s records are part of the New York Public Library’s amazing historical collections. They recently began a three-year project that will organize, catalog, and preserve this huge (almost 1,000 linear feet!) collection.

The official handwritten proclamation  is housed at the National Archives and Records Administration (NARA). They have a great entry on this important document with photographs of the five page document on their website. It appears that it was written in the hand of a government official, as you will see the handwriting looks much more formal than Lincoln’s distinctive scrawl.