The Woman that Saved the Union

March is nearly over and since it is Women’s History Month, I thought it would be interesting to share something I recently learned about due to two very different objects that we treated here in the Works on Paper conservation studio.

Several months ago, I treated an engraving by A.H. Richie based on a painting by Francis Carpenter  titled “The First Reading of the Emancipation Proclamation”. 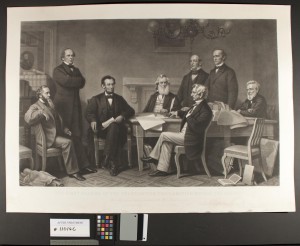 See that empty chair in the right corner? I thought this was a little strange, especially since there is an open book, a portfolio and a map surrounding it. But, I didn’t really think any more about it.

Then, a few months later this poster came into the studio: 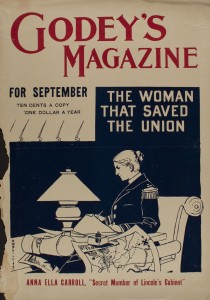 The Woman that Saved the Union

Now, I had never heard of this woman and I actually wondered if this might be a fictional story, so I did a little research to find out more about her. Anna Ellen Carroll was born in 1815 in Maryland and entered the male-dominated world of American politics at the age of 35 and became well-respected for the political pamphlets she wrote and distributed. During the Civil War, she became a “secret” member of President Lincolns cabinet. She was sent with an army officer to observe and report on the War on the Western front and was considered by some to be a secret agent acting on behalf of the President. The reports and the military strategies she recommended had a major influence on the demise of the Confederate Army and most notably ended the intervention of European nations on behalf of the Confederacy.

However, her roll in the cabinet and as a military advisor was kept secret. After Lincoln’s assassination, Carroll appealed to Congress to recognize and compensate her for her efforts to the war effort for many years. Finally, in 1881 a bill was introduced to do this and to compensate her at a rate given to major generals. However, the bill mysteriously disappeared and instead, Congress passed a bill placing her name on pension rolls and paying her $50.00 a month for the “important military service rendered by her during the late Civil War”.

But, her roll was alluded to much earlier than this when the artist, Francis B. Carpenter, painted the original oil painting that was later reproduced as an engraving in 1866. That empty chair surrounded by books and maps was his way of acknowledging the “unrecognized member of the cabinet”. 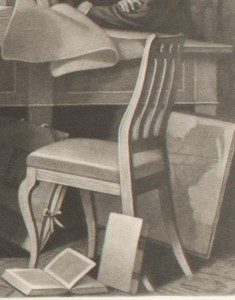 ← Love is in the air
Happy Easter from Works on Paper! →